First up, I just want to say a huge thank you for reading my books. As readers, your support and encouragement give me so much motivation to keep doing what I love to do!
I don’t get a chance to post much here on my blog but I wanted to take the time to let you all know where I’m at.
Unfortunately 2014 has been a year that has kicked my ass. One of those reasons is that I lost my mother at the end of September (last month). It was unexpected, and the shock and grief knocked me out flat. Time, my kids, and the support of family and friends, and the encouragement of my readers, is what is helping me most right now.

So what does that mean for my books? I’ve had to take a month off. In turn, it’s pushed back the dates planned for my upcoming releases. For that I sincerely apologise.
Where am I at right now?
I’m 200 pages into The End Game. What’s it about? An American college football star, Brody Madden, and an Australian female soccer sensation, Jordan Elliott, who takes on an international sports scholarship for her senior year at Brody’s college. It’s about how they fall hard in love, and how their careers beyond college take them on separate paths, and how the pressure to be who people expect you to be, will bring about the downfall of one of them, right to very rock bottom. And it’s about realising that love, and being true to yourself, is how you heal. You guys are just going to fall in love with these too so hard, and I’m really looking forward to releasing this book. It’s VERY outside my comfort zone (American football is something I’ve had to spend time researching). However, I used to play soccer so I’ve got that side down pat 😉 I have some assistance from some amazing people who are guiding me on certain aspects of this story to keep parts factual and true to character.
The photo shoot for the cover has already been done, and the cover is being put together by the very talented Mae I Design and Photography
Once I have a release date worked out I’ll be announcing it both here on my blog, and on all social media, and if able, I will set up a pre-order. If I do, I will also post links.

What’s going on with the Give Me series?
Well it’s still going, that’s for sure. There WILL be more books. The next is Give Me Hell (Mac and Jake’s story). And for those who’ve read Give Me Grace, I KNOW HOW DESPERATELY YOU NEED THIS BOOK! Believe me, I can’t wait for it either. Mac is the biggest badass of the bunch, really, and can you imagine how much trouble and grief she caused her older brothers growing up? Well as you might have gathered, Mac and Jake have known each other a long time, back to BEFORE the band, Jamieson, was formed in University, so that means Mac and Jake’s story goes right back to the start, and we get all the background. I think this is a book that is really going to round out the series, and add more depth and meaning to how this amazing group of characters all came to be. I’m EXCITED!
No, I haven’t yet started their story. It’s next after The End Game, and it’s all up in my head, ready to write out as soon as I can.

Merrick! This is something I’ve had to put back in my schedule for a long time. What’s going on with it? This is a story about two people both pre and post apocalypse. It’s about nuclear war and I consider both Merrick and Aeryn to be similar to a Romeo and Juliet style of love. Merrick’s father is General of the US Army. Aeryn’s heads up the Security Council for the UN. I won’t get into it too much, but I’m considering the need for two books  for their story. If so, I’m tempted to write and release both at the same time, rather than drag out the first with a cliffhanger. It’s something I need to think about while I get The End Game and Give Me Hell finished up.

What big story do I have up my sleeve that I haven’t shared with you yet? Well, it’s to do with Kelly Daniels and I’ll be sharing that with you all soon.

One last thing before I wrap up this blog post:
Signed paperbacks of Give Me Grace are now available! You can order them here:
https://katemccarthy.net/2013/12/06/signed-paperbacks/
If you want to special request Casey signing your book too, just mention it in the comments 😉 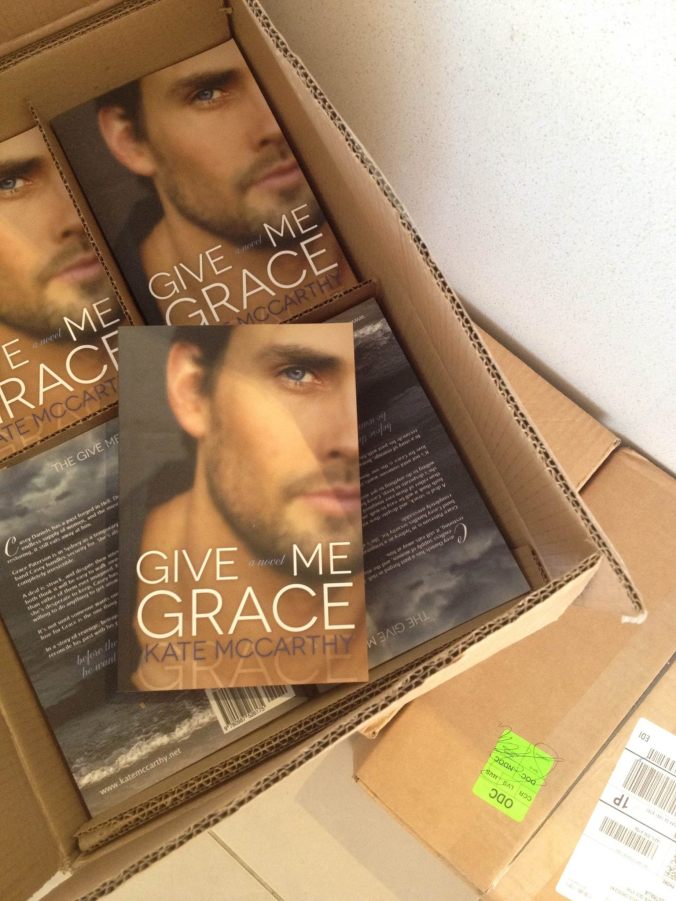 2 thoughts on “What’s been happening with me ….”